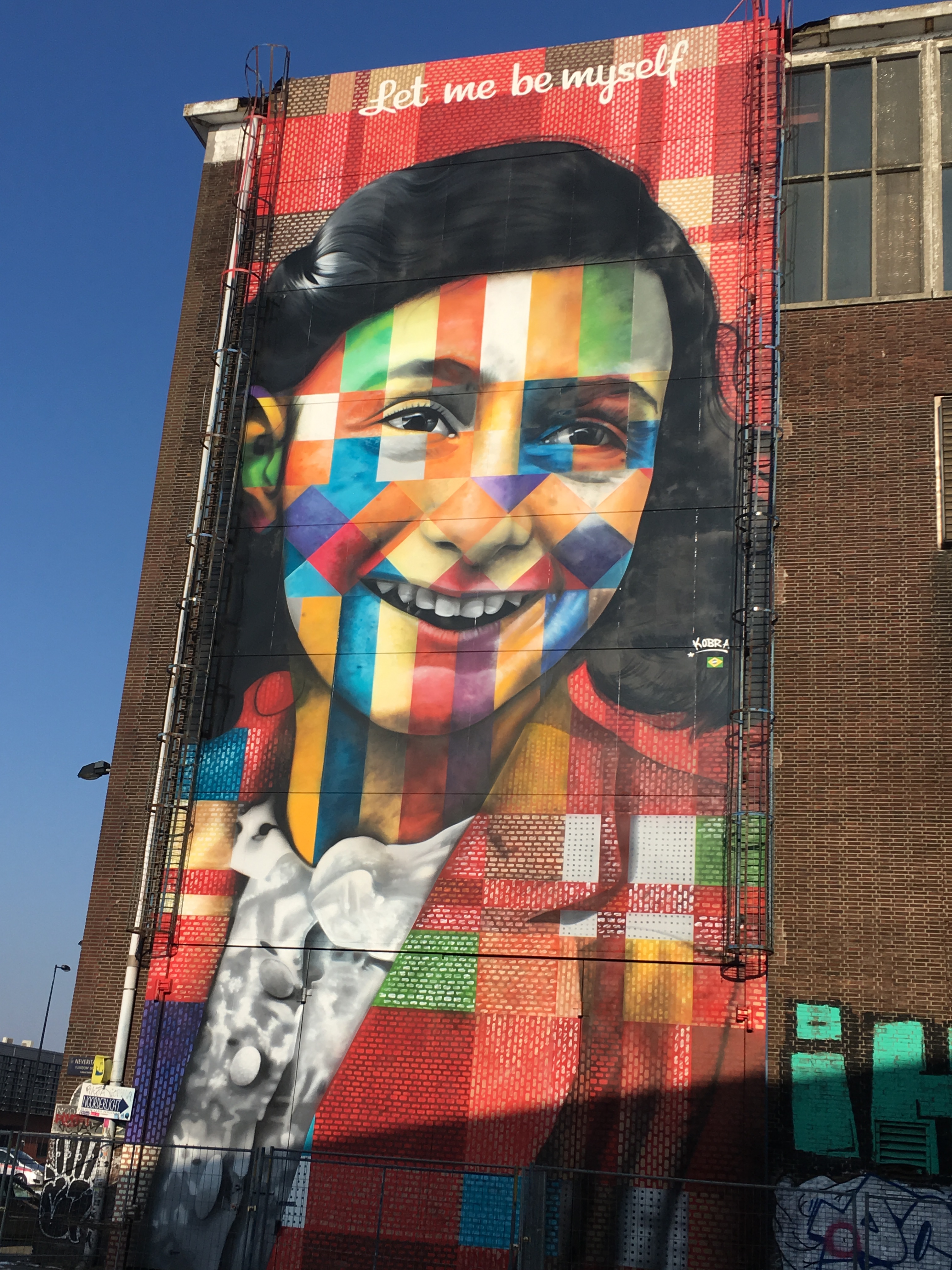 Today I ran across this artwork in the Wharf area of Amsterdam.  Tomorrow our daughter and I have reservations for the Anne Frank house.  If any of you have the opportunity to go, they have changed their policy and now until 3:30pm each day, admission is by reservation only.  It is worth the effort to make reservations rather than stand in a long line after 3:30pm to get in.

Baruch made it home to Israel.  He has some show tapings to do as well as teach some Bible studies, and then he will arrive in Amsterdam to teach one evening and then our 3 day conference.

Due to travel delays, I was unable to post a commentary for the Parasha B-shalach.  Never to late to study G-d’s Word, so I thought I’d post this commentary from Baruch.

In this week Torah portion, one learns about the uniqueness of the Shabbat. It is clear from many places in the Scriptures that the Shabbat is connected to rest. I have heard many people state that of course we need at least one day to rest each week. This has led many to wrongly conclude that as long as a person rests one day each week he is keeping what I hear called the “Sabbath principle.” The question that I would like to pose in this article is whether the “Sabbath principle” is Biblically sound? In other words, was the intent of HaShem giving the Shabbat to teach humanity to take one day off each week?

To this question I answer an emphatic no! First of all, the term “rest”, to which Scripture is referring, is not a physical rest nor was the Shabbat commandment given to all humanity, but only to those who had a covenantal relationship with G-d. It is important for one to understand that the Shabbat is more spiritual in nature than physical. Secondly, one reads in the weekly parashah,

“And he said to them what HaShem spoke, ‘Tomorrow is a Sabbath, a holy rest to the L-rd. Bake what you want to bake and cook what you want to cook and all which is left over, set aside for yourselves for a keeping unto the morning.’ They put away it until morning just as Moses commanded them and it did not stink and there was not in it (any) worms.” Exodus 16:23-24

One learns earlier in this same chapter that if a person put away that which was left over for the next day on any other day of the week but the sixth day, then it would be infested with worms. The obvious conclusion is that this miracle of keeping the food fresh for the Shabbat is based upon the fact that HaShem sanctified the Sabbath day and not any day of our choosing.

The message regarding the Shabbat and for that matter all the “appointed days” is to get on HaShem’s calendar and schedule, rather than expecting Him to bless our schedules. Responding to G-d’s time table demonstrates faith and a desire to have Him order our lives, rather than believing that He is going to react to our agendas. In other words, one will find blessing when he or she enters into G-d’s purposes and plans, rather than praying for Him to take an interest in what we have going on in our lives.