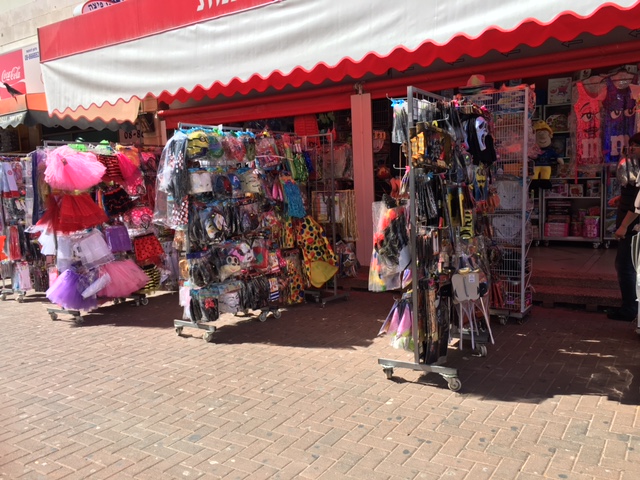 Purim is Yud Dalet Adar, which falls on March 12 this year.  My posts from last year give a good overview of the holiday.  (See March 10)

While out on my walk today, I passed this store, selling costumes for the holiday.  Some children dress up as Esther or Mordechai, while others choose to be non-religious characters such as Superman, etc.

We will be studying the book of Esther at our Beer Sheva study on Wednesday night and also at our Study Center on Saturday night, where we will also be reading the Megillah and enjoying Purim treats.  Megillah means “scroll” in Hebrew.

This is probably the perfect time of year to reflect on the rising anti-semitism in the United States.  The vandalism in 3 cemeteries, the numerous bomb threats, and the increase in anti-semitic graffiti in subways, on buildings, etc.

Anti-semitism is satanic.  There is no other explanation.  What other race of people has contributed so much to any society they have lived in, only to be thrown out, forced to convert, or be put to death?  The percentage of Nobel Prize winners, scientists, writers, artists, etc., is so much higher than any other ethnic group.  And yet there is the hatred.

This Purim, read the story of Esther  (Megillat Esther) with this in mind.

1 thought on “A Purim Preview”