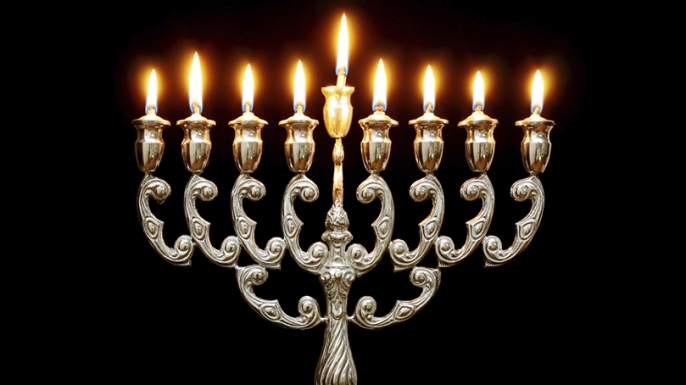 When you hear the word “Hanukkah” what thoughts enter into your mind? One of the best answers in victory! And not just any type of victory, but one which is supernatural. When the Jewish people defeated the vast Greek army, it was indeed miraculous. All too often, individuals think of the battle as simply a conflict between two nations, much like all the other wars which have happened over the centuries. Yet there is something unique about this conflict. It was not based in some dispute about territory or simply one people’s desire to rule another. At the heart of this battle was worship!

Recently I returned from a speaking trip to Romania. While I was there I spoke to many people. In actuality it might be better to say I listened to many people share what life was like under the communist rule. People could go to religious services, but it was forbidden to share with others one’s faith. If someone was not part of a congregation and wanted to attend a worship service, the secret police would assume that some other person had influenced them to come. The police would frequently arrest one from the congregation whether or not this one had actually shared or not. There had to be someone held accountable. Those who were public about their faith would lose jobs, be rejected for higher education, be imprisoned, and even tortured.

The message of Chanukah, like so many of the Biblical holidays, does not only point back to an event in history, but it holds a great significance for the future. It is not by chance that that in Daniel chapter 8 that the he-goat which relates to the Anti-christ is called the kingdom of Greece. Daniel also connects the Anti-christ to the Greek tyrant Antiochus Epiphanes. There is a tendency for history to repeat.

The Bible is clear that in the end times a world leader will emerge who will persecute people who obey the word of G-d and who have the testimony of Yeshua. It will not matter where one lives, what is his ethnicity, or any other factor. If he follows Yeshua, he will be persecuted. Antiochus was a most cruel and barbaric tyrant who committed atrocities against the Jewish people who wanted to obey the Torah commandments.

Much of the believing community has been taught that they will not suffer in the end times. A very important term which relates to this idea is “great tribulation“. It is vital that one understand this term in the two ways that the Bible speaks of it. There are three places where this term appears: Matthew 24:21, Revelation 2:22 and 7:14. Although the words, “great tribulation” appear in these three places, there is an important distinction which must be made. In Matthew 24:21 and Revelation 2:22, the term does not have the definite article. Hence in both of these passages the text is only speaking that there will be great tribulation. Without the definite article, the text is simply speaking about great suffering that will be experienced. It is clear from the context that the Matthew passage is speaking of the tribulation period known as Jacob’s trial (See Jeremiah 30:7). However, it is impossible to be dogmatic concerning Revelation 2:22 as to what period of time John is referring. In regard to the text from Revelation 7:14, the definite article is included. This means that one cannot translate the verse, “…these are the ones coming out of great tribulation….“, but the verse must be translated, “…these are the ones coming out of the Great Tribulation….”

This means that the period of suffering which believers will go through near the end of this age (what is revealed in the fifth seal of Revelation 6:9-11) should properly be known as the Great Tribulation. This period should be distinguished from the time earlier mentioned with the phrase, Jacob’s Trial. The period of Jacob’s Trial will coincide with G-d’s judgment and wrath falling upon the nations. This tribulation period will be the worst time of suffering known to man. Obviously the Great Tribulation is prior to the Rapture and ends with the Rapture, while Jacob’s Trial and the time of HaShem’s judgment and wrath comes after the Rapture.

At the end of the book of Daniel, Daniel speaks about this latter period as a times, times and a half time, i.e. 3 1/2 years. In the book of Revelation, this same period is referred to as 42 months and 1,260 days (also 3 1/2 years). What is unique in Daniel chapter 12 is that Daniel speaks about those who endure to 1,335 days, an additional 75 days (1,335 – 1,260 = 75 days). In the Prophecy of Zechariah, there is an allusion to Yom Kippur in regard to Yeshua’s return. It is important to note that there is exactly 75 days between Yom Kippur and Hanukkah.

The term Hanukkah is derived from a Hebrew word which means “to dedicate”. In the same way that after the spiritual pollution of Antiochus Epiphanes the Temple was dedicated to be used again, this will also take place after the spiritual pollution of the Anti-christ in the last days. Those who reach the 1,335th day will witness Messiah Himself rededicating the Temple for the Millennial Kingdom.

So when you celebrate Hanukkah this year, and I hope you do, do not just think about the victory over the Greeks some 2,000 plus years ago, but the victory of Messiah over Satan which happened at the Cross, but whose results will be fully known at a Hanukkah in the future which will mark the inauguration of the Kingdom.

1 thought on “A Hanukkah Message”