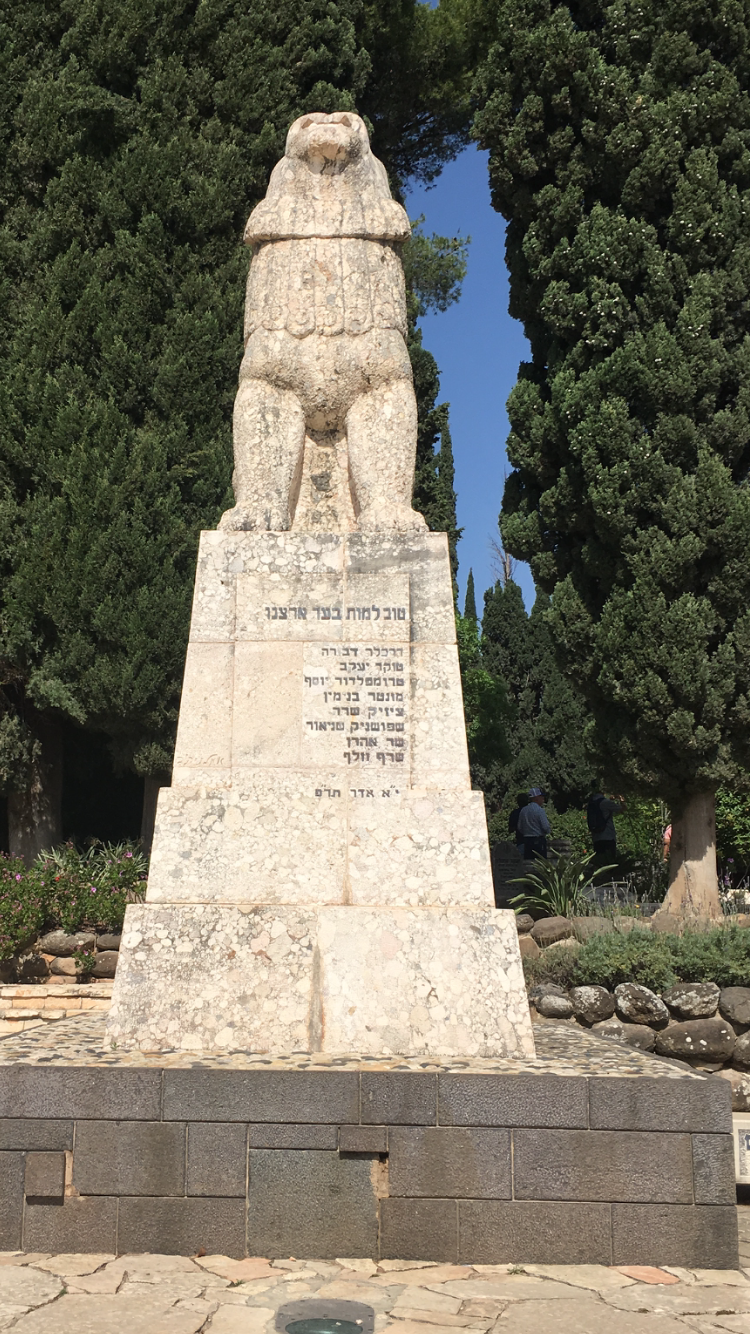 The first site we visited on May 10 was in Kiryat Shemona, which is very close to the Lebanese border.  Here, we went to a memorial to Joseph Trumpeldor and seven others who were killed in an Arab attack in 1920.

Trumpeldor came to Israel after serving in the Russian army.  He taught the Jewish men who were farming and working the land how to defend themselves and their community and he organised the Zion Mule Corps, which at the time was called Tel Chai.

After the murders, the town changed its name to Kiryat Shemona, which means the town of the eight.

We then made our way to Caesarea Philippi.  It was very significant that it was here that Peter declared, “Thou art the Messiah.”  At the time, Caesarea Philippi was a place of idol worship.  People worshiped gods such as Pan and Zeus.  Therefore, this declaration was further emphasized by being in the midst of all the foreign gods.

We then continued on up the Golan Heights to Birkat Ram, where we took a short refreshment break and enjoyed the view.   This lake is sourced by rainwater and an underground spring.  On the way to this location, our guide Naftali explained to us about the Druze people who live in this area.  The Druze are a group of people who separated from Islam about 1,000 years ago,  They tend to be loyal to whichever country they live.  Therefore, the Druze serve in the Israeli army and are generally not a problem in Israel.  Those who live in the Golan Heights grow apples, apricots, etc.

We had planned to stop at an overlook into Syria, but those spots were blocked off by the Israeli Military due to the current situation with Syria.  However, we were still able to see Syria as we drove by and also take pictures of some of the tanks, etc.

Talmudic Village is an archeological site in Katzrin, the capital of the Golan Heights, where we can view ruins from a  century village.  An ancient wine press and olive press found there have been made functional with new ropes.  While there, we also viewed a movie, which showed how some of the rabbinical laws were brought into being.  Sadly, it explained how it was concluded that the decisions of man were to be followed and that G-d would then agree.

We then returned to Tzfat for dinner.  Our evening was concluded with another walk in the Old City, this time up to the citadel.  It is the highest point in the town.  This structure was built around 1102 and it was an important site to control the area from the time of its construction until the War of Independence in 1948.

It was extra special to be there last night, as it was the 70th anniversary of the victory of the Jewish residents over the Arab residents in 1948.  At the time, there were about 12,000 Arabs in the town and only 1,700.  The Jewish people won a miraculous victory, and you might enjoy googling and reading the entire story online.

I have more pictures to share with you but they are not uploading here in the lobby of the hotel.  I hope to get them posted tomorrow!