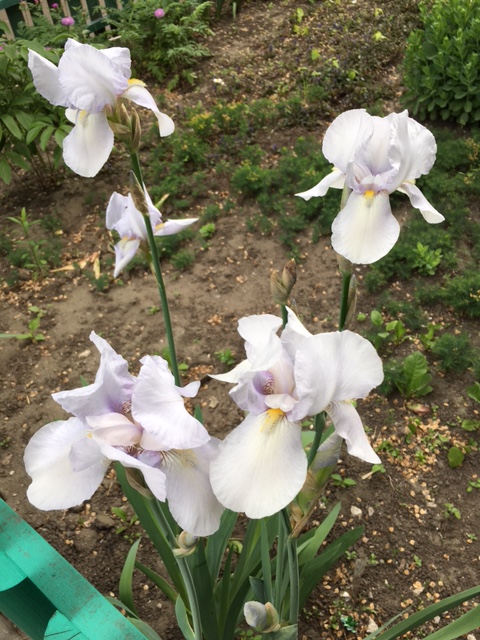 Irises, seemingly the unofficial flower of Ukraine! (they were everywhere)

The trip to the Ukraine and the Conference were very memorable.  We made arrangements to take a bus from Keiv to Cherkasy (Conference site) , which never showed up.  So we had took a taxi (3 hours) which thankfully turned out to be not so disastrous ($105). We had a driver who spoke very little English.  It was such an interesting drive there, as the cars going both directions swerved back and forth across the center line, as they avoided large potholes.  We were hanging on 🙂   Also, the police stopped our driver to check something out, we were never sure exactly what.  It was interesting to see the driver tugging at his license, trying to get it back from the officer. In the end, no problem, and we  arrived there before the bus.

The people in Cherkasy were wonderful.  They prepared meals for us, they gave us gifts, and were very attentive and appreciative of the conference.  The translator, Oksana, did a wonderful job and had such a good command of English and its grammar. Baruch remarked that she needs to give him English lessons.

We had two friends with us who enjoyed the people of Cherkasy as much as we did and were equally moved by the growing faith of the fine people of this town.  While we ate on Erev Shabbat after the first evening of the conference, Pastor Vadim told us of some of the persecution that took place in Cherkasy against the Jewish residents.  There was a ghetto there during WWII and several Jewish people were thrown into wells where they all drowned; some, simply because there was not enough room for all the people to be on the surface and others over the many hours in the water struggling to live. What a horrible thing.

On Shabbat, after the conference ended for the day, Oksana and two of her daughters gave us a walking tour of the city.  Some of the things most memorable were:  the beautiful buildings, the view from a hill with a huge statue overlooking the river, and coming across one of the former synagogues. There used to be 13 synagogues in Cherkassy and a thriving, educated Jewish community.  Now, there are 2,000 Jewish people left in the city.  One Jewish family who left there, and immigrated to Israel, now attend Bible studies at our study center!

We also saw a memorial to the soldiers who have died so far in this recent conflict with Russia.  Thus far, Russia has taken approximately 10% of Ukrainian land. One of the pastors of the church that hosted the conference, who was from the war torn area, remarked that Russia is slowly taking more land.  At the memorial, there was a man from a nearby village, who brought his little girl to see the memorial and the picture of a young man from their village who was killed.

This is a very difficult time for the Ukraine.  They were under communist rule from the end of World War II until 1991.  Now, they have Russia invading their border.  Let’s pray for them during this difficult time.

On Sunday, as we were leaving the city, we drove past a small parade.  Some of the people we recognized from the conference.  They were marching in support of the Christian community in Cherkasy.