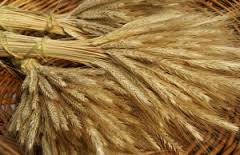 The Omer period is the time between the First Shabbat after Passover (meaning the Shabbat [7th day Sabbath, not holiday/high day Shabbat] and Shavuot.  See Leviticus 23:15-16.  Shavuot, or Pentecost, is the 50th day.

This mitzvah derives from the Torah commandment to count seven weeks (one Biblical method) and forty-nine days (the other Biblical method) beginning from the day on which the Omer, a offering containing an Omer-measure of barley, was given to the priests, up until the day before the festival offering was brought to the Temple on Shavuot (Pentecost).  The idea of counting each day represents spiritual preparation and anticipation for the giving of the Torah.

This is the bracha (blessing) which is said each evening at the counting:

Blessed are You, Lord our God, King of the Universe, who has sanctified us with His commandments, and commanded us concerning the counting of the Omer.

Karaite Jews and many believers (including us) begin the counting on the Sunday after the weekly Shabbat, this year April 16.  Shavuot (and the first day of counting the Omer called ReSheet) is the only holiday for which a specific date is not given. Therefore, it is reasonable to assert that the day is not fixed, but rather dependent upon the day on which the counting of the Omer begins.  I will say more about Shavuot as this Festival approaches.

1 thought on “Counting the Omer”