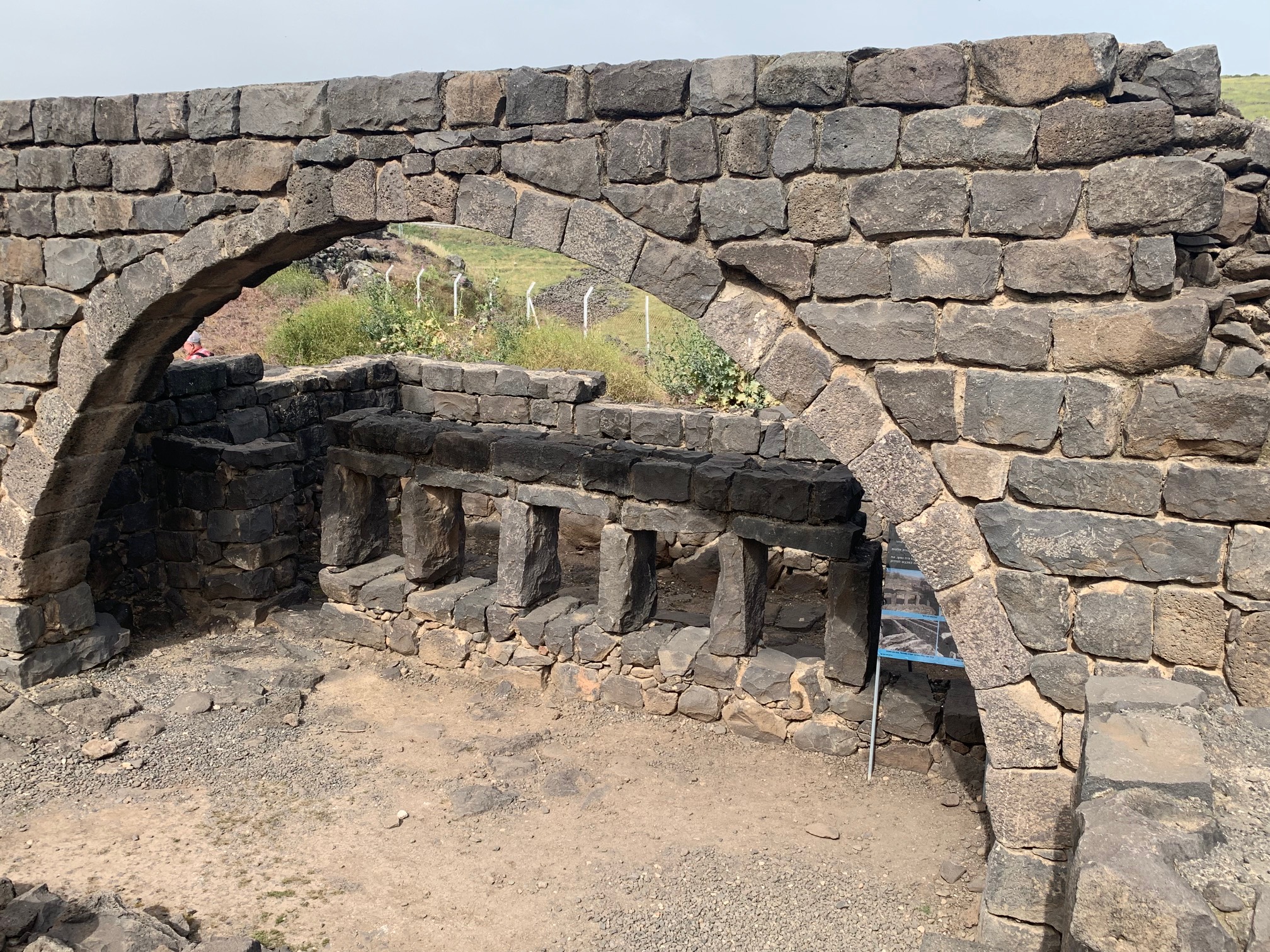 Ruins at Korazim. The structure is next to the ritual bath, which includes arches.

On Day 4, we were able to visit three Biblical cities:  Bet Tzaida, Korazim, and Capernaum (Kfar Nachum).  Kfar Nachum is situated along the Kinneret (Sea of Galilee).  Yeshua started His ministry there.  Baruch spoke about how Messiah would come from where the land of Naftali meet with the allotment of land given to the tribe of Zebulun  (see Isaiah 9:1).

At Korazim, we were able to see ruins of the synagogue as well as the community mikva. The seat of Moses can also be seen there.  See below.

After touring the site, we stood and waited for the 10:00 am siren to remember the victims of the Holocaust for Holocaust Remembrance Day.  The siren sounded for 2 minutes while people all around Israel, including our group, stood in silence and remembered all of those who lost their lives.

We then headed to Bet Tsaida, where Yeshua performed the miracle of healing the blind man (Mark chapter 8).  This town was very prosperous.  The Talmud states that at the markets there were 300 types of fish at the market.  This was very significant, for it was showing how the blind people of Bet Tsaida were blind to the truth of Messiah.  We were challenged to think about the changes we need to make in our lives.

After that, we headed to Kfar Nachum (Capernaum).  Baruch reminded us of the Centurion who loved Israel and built them a synagogue.  We then were able to view the remnants of that synagogue.

The darker stones are remnants of the synagogue from the time of Yeshua (built by the centurion) and the lighter stones are from the late 4th century AD.

We then headed to Mt. Arbel, to view the wonderful vista of the Kinneret, Golan and Galilee. There are documented Jewish cliff dwellings dating back to the Second Temple period in the area.

Our last stop of the day was a boat ride on the Sea of Galilee (Kinneret).  It was a beautiful day.  The boat captain played the national anthem for all nations represented by our group (we were the only group on the boat).  We have people from the United States, Singapore and Australia.

We returned to our hotel for another tasty dinner and time to pack for our final destination on Friday afternoon…Jerusalem!