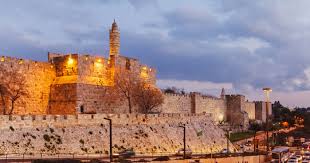 Today, President Donald Trump declared that the United States will move its Embassy to Jerusalem!  Other presidents have said that they would, but none have followed through.  They are expecting violence in Israel, as the Arabs have been encouraged (not that they need to be) to attack Jewish people.

Please pray for Israel and her leadership.  We must stand strong and defend what is ours.