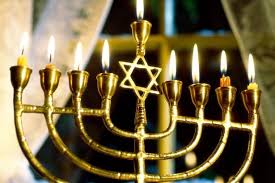 This evening begins the holiday of Hanukkah.  May you have a very blessed Festival of Lights!  Recently, Baruch wrote a brief article concerning Hanukkah and I thought I’d share it with you here.  Blessings!

The Hebrew word Chanukah relates to dedication, as the Temple was rededicated after the sacrilege which Antiochus Epiphanes committed in approximately 167 BC. However, because this festival relates to the miracle of oil, which allowed the Menorah to continue to be lit for eight days, it is also known as the Festival of Lights. Naturally, there was always a connection between the Menorah and Light.

In the Scriptures, light frequently is related to the Word of G-d. Scripture is G-d’s revelation to humanity and therefore one can anticipate a relationship between Chanukah and revelation. In other words, HaShem wanted to reveal a message to His people through the events of Chanukah. In fact, there are five truths that one can derive from Chanukah.

May your observance of Chanukah bring you closer to the Kingdom perspective where your focus is not of the things of this world, but as Paul admonitions the believer, Set your mind on the things above where Messiah sits at the right hand of G-d (see Colossians 3:1-2)