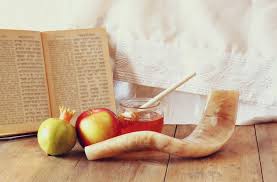 Rosh HaShanah begins Wednesday night at sundown.   It is observed for 2 days and will end Friday night and then we observe Shabbat.  So, in Israel we will have 3 days of Yom Tovs/Shabbat.  We want to wish you a blessed holiday.  Blessings

Please find below an article written by Baruch for the holiday

The Fall Festivals consist of The Day (or Memorial) of Sounding (Rosh HaShanah), The Day of Atonement (Yom Kippur), and the Feast of Tabernacles (Sukkot). In this article, I will focus on Rosh HaShanah. According to Rabbinical tradition, Rosh HaShanah is related to creation. More specifically, to the sixth day of creation. The view is that the very first Rosh HaShanah was on the sixth day of creation. This is of course the day in which G-d made man. The question one should ask is, “What can one actually know about this holiday from the Bible?” The answer is that this festival is celebrated on the first day of the seventh month (Tishrei). The first day of each month is called Rosh Chodesh. Rosh Chodesh is observed with joy. Scripture reveals that families would get together and there also seems to be an indication that a special meal was observed (see 1 Samuel 20:18). Although work is not formally forbidden on Rosh Chodesh, it appears that there is a preference not to do work on this day, but other Shabbat restrictions were not applicable.

In the month of Tishrei, Rosh Chodesh is also Rosh HaShanah and is a High Shabbat. This is a festival day which must be treated as a Shabbat, even though the day may not fall on the seventh day of the week. The fact that Rosh HaShanah is in the seventh month also expresses a significant message. The number seven relates to holiness; hence, Rosh HaShanah must also be connected to this concept. Remembering that the Scriptural name for Rosh HaShanah is the Day or Memorial of Sounding, one must ask what is the relationship between the sounding of the Shofar (Ram’s Horn) and holiness? The Shofar expresses G-d’s provision of what is lacking. How does one know this? On Rosh HaShanah, Genesis 22 is read in the synagogue. This passage is the binding of Yitzhak (Isaac). G-d provided the ram, which was caught by his horns (Shofar) in order that Yitzhak would not have to die. This fact teaches us that HaShem looks to each of His people and knows through His examination of us, what we are lacking in order to be holy. There seems to be something missing. In Genesis 22, G-d provided so Yitzhak would live and in regard to Rosh HaShanah it was stated that HaShem will provide so His people will be holy. What does life and holiness have to do with each other?

This is exactly the message which this festival wants to reveal; namely that one’s life should be directly connected to holiness. True life is not simply the opposite of death. True life is living in holiness. Biblically speaking, there is a direct relationship between the purposes of G-d and holiness. This means that only when one is fulfilling the purposes of G-d is this one holy and experiencing true life. Although holiness can refer to a state of being, this state is an outcome of behavior. For many believers in Yeshua, holiness and salvation are almost understood as one and the same. This is not entirely true.

When an individual accepts by faith the provision of the blood of Messiah, shed through His death on the Tree (Cross), this person experiences salvation. This blood justifies the believer through the grace of G-d found in Messiah Yeshua. Whereas Yeshua had placed upon Him the iniquity of the world, because our sins were transferred to Him, the believer has transferred upon him the righteousness of Yeshua. It is this provision of Messiah’s righteousness which assures the believer of his or her place in the Kingdom of G-d. It can also be said that G-d sees the believer as holy (a saint) because of His provision. All of this however is declarative. What does this mean? We (believers in the Gospel) are declared Holy, Righteous, and Saved by means of the work of Messiah. This is our true and eternal condition before G-d, i.e. nothing can change this because it was established by and in the sufficiency of Messiah Yeshua’s work— to Him be all praise!

These facts however, do not necessarily say anything about how the believer actually lives; that is how he behaves. Naturally, there is a strong expectation that the one who is saved, will submit to the purposes of G-d; however, one’s salvation is not achieved by this submissiveness, nor is our salvation maintained by it.

The message of The Day (Memorial) of the Sounding, i.e. Rosh HaShanah is this. When a believer hears the sounding of the Shofar, he should remember what G-d has provided for him to live a life which fulfills the purposes of G-d. In other words, there is a connection between Rosh HaShanah and sanctification. Many people do not understand sanctification. In both Hebrew and Greek, this term is derived from the word “holy”. Sanctification, therefore, relates to a process whereby the believer becomes holy, not in the declarative sense, but in action and in deed. It is only by means of sanctification that      a believer actually manifests the glory of G-d. It is the manifestation of G-d’s glory that fulfills the purpose for which man (male and female) was created.

Sin of course made it impossible for man to manifest G-d’s glory. Creation, after sin entered into the world, could never fulfill G-d’s purpose. Isaiah the prophet knew this and when he heard the angels saying, “Holy, Holy, Holy, is the L-rd G-d of Hosts, the whole earth is full of His glory” he was highly disturbed and said, “Woe is me.” Isaiah knew that he could never be holy nor could his people in their current state. It was at the time Isaiah was lamenting that one of the angels provided atonement for him. This free atonement foreshadows the work of Messiah. It is only through the redemption, that Messiah Yeshua provides, that one can become a New Creation and have the potential to manifest G-d’s glory.

Therefore, on this Rosh HaShanah, as you hear the sounding of the Shofar, remember what HaShem has provided, Messiah’s life for our redemption. I do not think it was a coincidence that in the Torah, what we commonly refer to as Rosh HaShanah is actually called זיכרון תרועה (See Leviticus 23:24) and יום תרועה (See Numbers 29:1). The first Hebrew phrase is The Memorial of Sounding, while the second Hebrew phrase is the Day of Sounding. It is understood that the term “sounding” is referring to the Shofar. The ancient sages discussed the significance of the order. It seems more reasonable to mention the Day of Sounding first and then later, the Memorial of Sounding. However, such logic is according to man and not G-d.

It has already been stated that Rosh HaShanah relates to what G-d provides in order that His will might become a reality. As believers, we know that ultimately G-d’s greatest provision is His Only Begotten Son, Yeshua. When hearing the Shofar on Rosh HaShanah, it is His death that one should remember. In Hebrew, the term memorial actually is derived from the word “remember”. In other words, it looks to a past event, i.e. the Lamb of G-d Who was slain before the foundation of the world. The term Day of Sounding looks forward to the day when the Shofar will be sounded and Messiah will return. This is not to imply that Yeshua is going to return on Rosh HaShanah; rather, that on Rosh HaShanah we should proclaim the fact that He is going to return and provide for His people His Kingdom.

Happy Holidays to all of you!