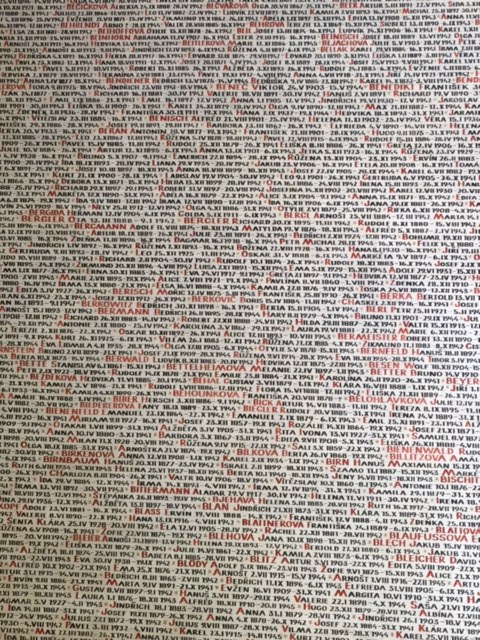 Part of a wall of names of those Jewish citizens of Prague exterminated during the Holocaust.

We know that anti-Semitism is on the rise.  We also know that in the last days, the Jewish people will be brought back to the Land.  How are these two facts related?  I believe that G-d is using this terrible belief to cause more and more Jewish people to return to the land (Aliyah) and thereby fulfilling prophecy.

Baruch has done some teaching for another organization here in Israel which deals with new immigrants and ministers to the homeless  They are seeing an increase in the number of Jewish people from Eastern Europe and from the former Soviet Union regions, including the Ukraine.  Most Ukrainians also know Russian and we are provide the Discipleship Manual to ministries to distribute to some of these people.

As I’ve said before, there is also the leader of a Messianic congregation in Ashdod taping our Saturday night study and translating it into Russian.  Effort is being made to make people aware of Baruch’s teaching videos which are dubbed into Russian and Ukrainian for CNL television.

We trust that these steps are getting the Gospel message to Jewish and non-Jewish people in Russia and the Ukraine as well as Jewish people who have immigrated to Israel. Thank you for helping to make this work possible.

2 thoughts on “Movement of People”