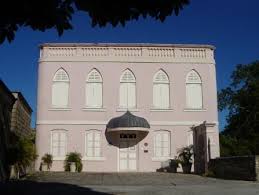 Thursday, the exterior walls around the historic Nidhe Israel Synagogue in Speightstown, Barbados, were vandalized with anti-semitic graffiti.  The synagogue was originally built in 1654 but was destroyed in a hurricane in 1831.  This is the first instance of such anti-semitism in modern history in Barbados.  This follows the increase in anti-semitism around the world.

One famous person who attended the synagogue for a couple of years, and who died in the Bahamas was Rabbi Raphael Haim Isaac Carregal.  He was a very close friend of Ezra Stiles, who became the president of Yale University.  Stiles was not Jewish, but he and Rabbi Carregal held a close friendship in which they discussed Messianic passages and wrote letters back and forth in Hebrew.

A few Jewish people from Brazil, who were persecuted by the Portuguese, came to Barbados in the 1660s and brought with them knowledge of the sugarcane industry.  They helped make Barbados one of the richest European colonies in the West Indies.