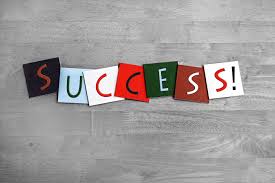 בס”ד
Parashat Vayeishev (And he dwelt) Genesis 37:1-40:23
Haftarah: Amos 2:6-3:8
In this week’s Torah portion one learns the definition of success. Not only this, but also the secret of how to be successful is also revealed. So often people define success by the wrong terms; they think that success is linked to wealth, fame, achievement and the like. In our parashah, it states that HaShem was with Joseph. This is where success begins, when you are with the living G-d. Why do I say this? The reason is found in how the text reads,
“And it came about that HaShem was with Joseph and he became a successful man…” Genesis 39:2
Perhaps many would respond that they too have a relationship with G-d by means of Messiah Yeshua, but they do not feel that they are successful. They may well be right in their assessment. There is indeed more than HaShem being with an individual for that person to be considered successful. This is why the next verse states,
“And His master saw that HaShem was with him and all which he does, HaShem made successful in His hand.” Genesis 39:4
The first point which I want to make about this verse is how important it is that the text states that Potiphar (his master) saw that HaShem was with Joseph. If others cannot see your commitment to Yeshua by how you behave, then you are not successful. The entire reason G-d does not immediately take a person to heaven after he accepts Yeshua is so that person can have an influence in the life of others. It is like Yeshua taught, no one lights a candle and then places it under a basket.
The second reason Joseph was considered a success was that he demonstrated to others that HaShem ruled his life. At the end of the verse one reads, “…and all which he does, HaShem made successful in His hand.” The second point is underscored by the use of the present tense. The present tense is somewhat rare in Biblical Hebrew. When it appears, it usually relates to a situation that is recurring. In other words, there was a consistency to Joseph’s life whereby others could see G-d moving in and through it.
Finally, it is important how one understands the pronoun which modifies the noun “hand”. By far most translations understand the pronoun “his” as referring to Joseph. However, I translated it as referring to HaShem. There are a few reasons why I did this. First, the proper noun which is nearest to the pronoun is HaShem. Second, the Hebrew phrase, ביד may denote a fuller meaning than one may think. In Hebrew the phrase, “in the hand” can relate to authority or power. Hence, the idea that is being expressed here is what Joseph did was made successful because he was under the authority of the L-rd and being empowered by Him.
Success is indeed when others see your actions and realize that it is not you who causes you to behave in the way that you do, but it is clearly manifested that you are acting under His power and submitting to His authority.
Are you a success?