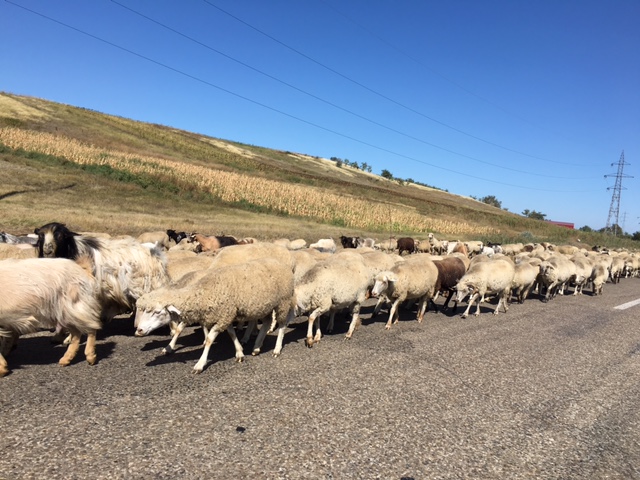 Sheep walking along the highway in eastern Romania.

This week there are 2 parashiot:  Nitzavim and Vayelech.  Please find below a short commentary Baruch wrote on Parashat Nitzavim.

In this week’s Torah portion, the reader encounters an aspect of G-d that most people tend to ignore. What is this aspect? That the One True Living G-d will display vengeance at times!

“HaShem will not forgive him, for His anger and His zeal will smoke against that man and he will lay upon him all the curses in this book and will blot out his name under heavens.” Deuteronomy 29:9

When one reads the context for this verse he will learn that the outpouring of G-d’s vengeance will come upon all who do not obey the commandments of the Torah—perfectly! That means you and me. It always amazed me that the children of Israel did not cry out and say to G-d we will never be able to fulfill all the commandments of the Torah and therefore they look for another means to find favor with G-d.

A popular expression among one Hasidic sect is “We Want Messiah Now!” This short sentence expresses so very much. At the heart of the expression is a beseeching of G-d to do what Israel will never be able to do on her own—establish the kingdom of G-d. For this is the work of the Messiah. As unable as man is to bring about the kingdom, so are we unable to conquer of sinful nature and obey HaShem in total subjection. This is why Rav Shaul spoke of the necessity of becoming a new creation (2 Cor. 5:17). Within this verse is Rav Shaul’s favorite expression—“in Messiah”. These two words reflect a relationship that speaks to death and resurrection. This death is the outcome of G-d’s vengeance and the resurrection is the new life that is brought about through the redemptive work of Messiah. This new life is synonymous with what Rav Shaul was speaking about with the words, “a new creation”.

The point is that I, in my present condition, am without hope. It is only when I give up on my life and embrace by faith, the life of the Messiah (His personhood and work) that the very power of the resurrection causes me to become not just different, but someone new. This change and newness is also seen in this week’s prophetic reading from Isaiah. Here the prophet speaks of the change so powerful that the Jerusalem which was called “forsaken and desolate” will be transformed by redemption and be called “desired and ruled” (see Isaiah 62:1-12). Notice what this change reveals; that those who G-d desires He rules. One who is ruled over by G-d is blessed. It is a most desired position in which one can be. Someone who is a “new creation” has been created in a unique way so to be a ruled vessel of G-d. The problem is that all too often we want the benefits of being blessed by G-d, but we don’t want His L-rdship in our daily lives.