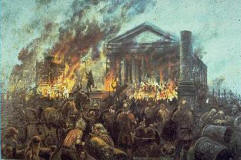 This year, Tisha B’Av (the 9th day of the Hebrew month of Av) falls on Shabbat, July 21.  Since one cannot fast on a Shabbat, other than to observe Yom Kippur, the fast this year is observed on Sunday, July 22.

I”m posting this new commentary by Baruch a couple of days early so that you can print it out and study it during this sad and reflective time.

On the ninth day of the month of Av, both the first and second Temples were destroyed. The destruction of the Temples were catastrophic events for the Jewish people. These destructions were also associated with the people going into exile. The exile that began in 70 AD has continued for nearly 2,000 years. Today, there is the nation of Israel and Jewish people are returning to the covenantal Land; however, without a Temple the exile continues. As believers in Messiah Yeshua, is the Temple necessary? Obviously from the perspective of salvation and the forgiveness of sins, Yeshua’s death is sufficient. But if the believer can move beyond his or her justification and look towards the establishment of  the Kingdom, then the Temple is of great importance.

If we operate with the Mind of Messiah, then we are going to desire the same things as Yeshua and therefore we will want His Kingdom to come. Although the Temple is not necessary for our relationship with G-d, the Temple plays an important prophetic role. A key eschatological event is the Abomination of Desolation (see Daniel 9:27 and 2 Thessalonians 2:3-4). This is when the antichrist, i.e. the son of perdition, will enter the Temple (Holy of Holies) and proclaim himself to be G-d and demand to be worshipped. This is of course a sacrilege and because the Jewish people will reject the antichrist, the time of Jacob’s Trouble (see Jeremiah 30:7) will begin. The Abomination of Desolation and Jacob’s Trouble are not pleasing to G-d. However, one must understand that these two events are necessary and must take place prior to the Kingdom being established.

One can also think of the Temple from another perspective. In the same way that a Temple was present during Yeshua’s First Coming, there must also be a Temple present for His Second Coming. This is the reason why the false messiah (antichrist) will enter into  specifically the Holy of Holies when committing the Abomination of Desolation. In order to profess his divinity and that he is the messiah, he has to imitate what the true Messiah will do. When Yeshua returns, the New Testament instructs the reader that He will come to the Mount of Olives. He will then descend this mountain and enter through the Eastern Gate to the Temple compound. Yeshua will rule over the Millennial Kingdom from the Holy of Holies upon the mercy seat. The mercy seat is the same place that, when Moses went into the Tabernacle to dedicate all the vessels for worship, he heard the voice of G-d speaking to him from above the Ark of the Covenant. The mercy seat is actually the cover for the Ark of the Covenant.

When looking at Old Testament prophecy and the New Testament, one must conclude that the Temple holds a vital place in regard to the Kingdom of G-d. Therefore, it is most appropriate that believers in Yeshua observe Tisha B’Av. The question that presents itself is how should this day be observed? I would like to suggest a few things that would be spiritually beneficial to do in observing Tisha B’Av.

It is important that one realize that the Temple will function during the Millennial Kingdom.  However, believers who will have taken part in the Rapture will not participate in offering any sacrifices at the Millennial Temple. Yet we will worship at this Temple. There is a common tendency for believers to ignore what was done at the Tabernacle and Temple when they existed. This is improper. Scripture includes a great deal of information concerning the vessels that were in the Temple and how worship was done there. This revelation assists believers in learning the Biblical parameters of G-d pleasing worship.

Today, there are numerous things which are done in congregations which are presented as acceptable and worshipful which are outside the Scriptural norms. When one does such activity which is not Biblically sound, it becomes a form of idolatry. All worship behavior which is not proper is idolatry. It can be understood in an additional manner. When a person does not worship in accordance to the Word of G-d, not only is it idolatry but the focus of such idolatry is the individual and not our L-rd Yeshua.

My hope is that by observing Tisha B’Av, this can have a spiritual impact on our worship and in the end it will be HaShem Who is truly glorified. Shalom